Hi everyone, hope you're all doing well.  Today I was at the Cleveland Hopkins airport and finally got to see the Superman exhibit since it just happened to be at the foot of the United baggage area where my relative was coming in.

It was a nice statue with a running movie loop going constantly.  I was happy to see some of my friends like the two Mikes and Brad Ricca involved.  Good for them and the city, as well as Siegel and Shuster.

Seeing the display made me wish I was Superman, but not for all the powers or flying or x-ray vision but just for the sake that like him, I'd be around for a long while...enjoying comics no doubt.

Take care and adopt a comic book today.
Posted by Chris at 7:32 PM No comments:

Hi everyone, hope you're all doing well.  Today, the day AFTER my birthday, is the day my friend and great Marvel/DC artist, Gene Colon, passed away just two years ago.  I think anyone interested in fine comic book art should look him up at any art web site and see why he was called, "the man who painted with pencil."

Me, I just called him my friend.

That's right, with apologies to that great song off the Beatles, "White" album, yes today is MY birthday.  How does that tie-in with comics?  Well, Superman's first appearance was marked, JUNE, 1938,  and so was I...only a lot of lot of years later, but same month.  There's my tenuous ties to comics

Take care and adopt a comic book today, then give it to me as a present because it's my birthday.
Posted by Chris at 7:35 AM No comments:

Hi everyone, having a good day I hope.  First off, boy did I have fun  signing autographs last Saturday at the Captains game.  My hand was sore from siging, "Many Thanks, Chris Lambert" so many times.

Next, everyone has GOT to buy the new Superman Unleashed comic.  It's got the greatest ending for a comic I've seen in a while.

Lastly, I got messed up grocery shopping today when a bomb scare closed Giant Eagle this afternoon.  Boy how I wished that I was Superman for about ten minutes so I could tell the police, "Coming through, I'm not worried in the least."  Instead I ran to the local convenience store and got hot dog buns there.  I'm a writer with a great imagination, but I'm not stupid.

Heading out now for an early birthday (it's actually tomorrow) dinner with my buddies.  So I have to go.  But remember to adopt a comic book today...and then give it to me, after all it would make a great birthday present you know.
Posted by Chris at 12:52 PM No comments:

Hi everyone.  Hope you're doing fine.

Now some might say it's that time of year when we all (as children) honor and think about (as well as hang out with, if possible) our wonderful Dad's.  Those same people might call that time of year June 16th, 2013, others...Father's Day.  You know what I call it?  I call it just another day since to me, EVERYDAY is Father's Day.  Because I can't place my best buddy (also known as Dad) on a higher pedestal than I do 365 days a year.  To me he is the best Dad, nay, he is indeed, with apologies to boxer, Ali, The Greatest.

He taught me how to read when I was three years old.  He gave me his old comics and bought me new ones and started me off on that wonderful hobby of comic collecting.  He also took care of me, supported me, chased away any fears and tears from childhood and lifted my spirits high as a child.  But mainly he made me laugh.

But last week he fell and broke his hip (at the age of 84) and from my relatives that live near him in North Carolina, is in a fair amount of pain.

So I called him earlier and gave him what I consider the greatest gift in the world...I made him laugh, the same way he made me laugh and smile and uplifted my spirits throughout my entire life.  And I plan to call him later and make him laugh some more.

But that's when it hit me.  This can't be called Father's Day, instead this should be referred to as "Chris's Day", my day, because I'll be receiving the best gift ever...I'll be hearing my Dad's voice.

Dedicated to all the Dad's, still here as well as those passed on, and adopt a comic book today.
Posted by Chris at 4:21 PM No comments:

Hi everyone, hope you're doing fine.  Today I'll be on WELW 1330 AM radio from 5-5:30 pm talking about the Superman movie no doubt.  I'm sure the subject of Superman comics will also come up.  I can't wait to get going on my beloved comics and all talk concerning such subject.

Also, Saturday, June 15th, 2013 (aka, tomorrow) from 6pm-8:30pm, I'll be at the Lake County Captains game signing autographs for a new FREE giveaway comic.  My contribution to the comic is a story (drawn by friend/artist David Russell) concerning baseball players during the game.

Stop by and say hello and get a FREE comic.  I'll see you there.

Take care and adopt a comic book today.
Posted by Chris at 11:50 AM No comments:

Hi everyone, hope all of you are doing well as we all wait for the new Superman movie that arrives in theatres Friday.  I can't wait to see it.  Hopefully this will jumpstart a Justice League movie.

Also, I will be appearing at the Lake County Captains game Saturday, June 15th signing autographs for a new FREE GIVEAWAY comic that I and my artist friend, David Russell, contributed to.  Hope to see you there.

Take care and adopt a free comic (at the Captain's game) this Saturday.
Posted by Chris at 10:59 AM No comments:

Superman, Me and the Mayor

Hi everyone, hope you are doing well.  I had a big day yesterday.  I was asked to appear at the Gordon Park Fair.  And while I was at my table tending my wares, I got to renew my friendship with author Brad Ricca, author of the new biography on the Clevelanders who created Superman.  I was greatly appreciative when I saw that Brad mentioned me twice in the acknowledgements as someone "with due respect to those who came before," as a Superman expert and early champion of comics in Cleveland.

Later in the day, Cleveland Mayor Frank Jackson showed up to get a picture taken with Brad for his splendid work on the just released bio, "Super Boys."  But then since I helped write the "Superman at 50" a quarter of a century ago, (and this is making a long story short) Mayor Jackson stopped by my table and even took a picture with me as he held up my book.  Quite a pride filled day that I'll be sure to tell my healing father (he broke his hip last week) about.

I also got to see an old friend, Gary Dumm, one of Harvey Pekar's artists on his ground breaking "American Splendor" graphic novels.  Gary even drew a large pencil drawing for me that is too great to describe.  Only now I have to draw one for him.

Anyway, please pick up a copy of Brad's new book and read the last part of my three part series on the history of Superman which is appearing in today's News-Herald.  And a big thanks to editor's Mark and Cheryl for seeing this series through.  And I'll be talking more about the Man of Steel through the rest of this month, so take care and adopt a comic today. 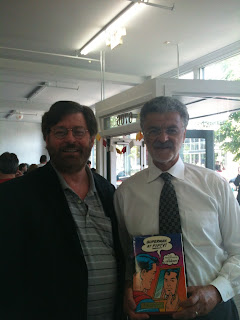 Mayor Jackson with a copy of "Superman at 50" 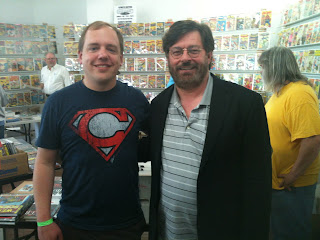 Hi everyone, hope you're all doing well.  I also hope everyone got to read part two of my Superman trilogy of articles in the News-Herald this past Sunday.  The paper is doing a wonderful job of the presentation.  I would have blogged everyone a day in advance to give all of you readers a "heads up" but I wound up with some bad luck and an emergency.

You see as I was about to blog Saturday morning, I received an urgent call that my father fell and broke his hip and was rushed to emergency surgery.  Of course some mild complications set in and he'll be on oxygen the rest of his life.  That figures with the family luck.  But this is a blog on comics, not one concerning how much I love my Dad.

But the term emergency fits in with Superman also.  You see, back in the 50's and 60's, The Man of Steel had a "Superman Emergency Squad" which was a bunch of duplicate, look-alike, Superman robots in case the entire world needed the big, blue boy scout all at once.  He'd just signal his robots and everyone took a task out of the "to do" list.

I'll keep everyone posted on Superman the rest of the month including an event I'll be attending this week.  Take care and adopt a comic book today.
Posted by Chris at 12:35 PM No comments: